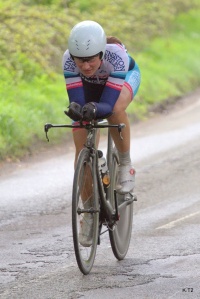 I picked up lots of great insight from Andy and Jill Wilkinson during my recent training camp in Mallorca, but perhaps one of the most important things is to ride my TT bike as often as possible so both the position and handling become more natural.

Last week (starting from the Easter long weekend) I spent a total of 16 hours on my Shiv and slowly I am starting to get more comfortable. I used the Shiv for flat/rolling training rides (up to 3.5 hrs for now), TT course recces, midweek evening club 10s as well as a commute (backpack and disc wheel a combi which at 15 mph, if already, made me look proper silly!)

During the midweek club 10 I managed to shave some 45 seconds off my pb for that course. However that was most likely always going to happen as I never rode it on the TT bike before. Still I am happy with that and nice to have an early benchmark now to improve on that course during the rest of this season (G10/42 for those of you who are familiar with TT course codes or a rolling dual carriage course near Dorking for those who are not). I reckon there is still quite a bit of room for improvement on that course if only for the fact that the visor I was testing out that night completely steamed up during the second half of the ride, resulting in loss of vision, confidence and speed but luckily I managed to finish safely.

This Sunday was the 4th event in the SEWTTS (South East Women’s Time Trial Series) with a 31.2 miles on H31/7 promoted as ‘Bath Hilly 50km’. Luckily it was nowhere near as far as Bath (Pangbourne/Bradfield area instead) and not as hilly as I feared (but still too hilly for a Dutch girl who loves chocolate and cheese). As this was the event I feared most in the series, I made sure to recce the course at least on two occasions, one being the weekend just before when I could conveniently combine it with the wedding of Chris’ cousin at Bradfield College (which is actually on the TT course). During my first recce back in February part of the course was still seriously flooded. By the time of the second recce the water had cleared but the road that re-emerged was pretty rutted and potholes for quite a long stretch.

Despite my recces (and therefore quite a good mental map) I still had some doubts about the course, less so about the hills than my ability to handle the Shiv on such a technical and challenging course. Add to that a weather forecast for heavy rain and I was, once again, keen to chicken out and opt for the road bike instead. If it wasn’t for my coach’s encouragement to ride the Shiv after all (because what if any of the Nationals happen to be on such courses), I would indeed have gone for my trusted Scott Foil Contessa. Cycling over to his house in the pouring rain that morning on my Shiv (as his wife who was also riding the event was kindly giving me a lift there), I was still silently cursing my coach. Although there was quite a bit of standing water in places (see images) the rain miraculously stopped during the TT and the sun even came out. Oddly enough I actually really enjoyed the event (at times perhaps a bit too much as I lost focus on power and position instead paying attention to the pretty surroundings in the sun). The course was very well signposted and marshalled and the cherry cake afterwards was delicious. Thanks Bath RC! I even had 2  slices, 1 for each lap 🙂

I didn’t do too badly either and came third in 01:25:19 after Rebecca Slack (who clocked an amazing 01:22:21 despite claiming she was unfit) and Suzetta Guerini who did 01:25:06. So pretty close to Detta who may turn out to be my benchmark for this series. More important than the result though is the enormous confidence boost this event has given me. I now know I can actually handle the Shiv OK even on hilly, twisty, wet courses. Thanks Rich!

The next challenge to tackle will be dealing with cross wind on the Shiv. I will slowly get there, one thing at a time.

Funny enough there were more women than men for Sunday’s event. And Bex’ winning time was not that far off the male winner who did 01:19:05. The scratch man punctured though as did Bronwyn. I feel for them and could further sympathise as I punctured my deep section front wheel during the ride home and stupidly only carried a spare tube with a valve that was too short for both my mini pump and the CO2 thingy … resulting in a very slow and careful ride home on only 30 psi…. I made it, but lesson learnt!

Credits for the images go to Bath RC.