After a long radio silence over winter, it is time to pick this blog up again. What’s more, it’s time to get back into ‘race’ mode …

I haven’t done any racing since the StoneWheelers 25m TT in September which helped me secure the Best British All-Rounder title. After a six-week break in December-January (of which four weeks were spent on honeymoon in sunny Tanzania), I finally climbed back on a bike again on Saturday 17 January to attend the CTT Champions Night. Those cold 80 miles during which my legs simply refused to do anything over 200 watts were definitely worth it to receive a huge trophy engraved with the names of true cycling legends like Eileen Sheridan, Beryl Burton and Julia Shaw. It was a great night and really good to see so many talented cyclists of all ages in one place. As I tried to express in my somewhat rushed and confused speech on the stage, I am truly grateful to all organisers, volunteers and fellow competitors for making the UK TT scene as unique and active as it is!

In contrast to last year when I felt fairly strong during the spring due to a lot of winter training volume, this spring was all about getting back to fitness before trying my hand at racing again. I also took a very different approach to the long cold miles from last year and became a complete turbo bunny. Aside from my commutes, I believe I only did 2 or 3 rides on the road during the whole spring! There was always an excuse of rain, wind or risk of icy patches. Rather than faffing around with layers of kit and bike cleaning, I preferred to jump on the turbo and put in some longer, quality sessions. Luckily the power came back again after a while and I am pretty happy with the turbo numbers. I like to think that I may have even learned something during those longer turbo sessions, listening to various podcasts to kill the time. I highly recommend Serial, TED Radio Hour and of course the Cycling Time Trial Podcast.

However, there is no hiding for ever. Eventually I had to get back on the road again and see if I could actually still handle a bike (not my forte anyway…). Two almost back-to-back training camps in the Costa Blanca and Mallorca in March were the perfect opportunity to get some good miles in my legs.

The first week was with my new team Paceline RT, a SW London cycling team with a focus on competitive events. We flew with BA from Gatwick to Alicante and stayed at VillaElNido in Javea/Xabia (Spanish vs Valencian way of spelling) in the Costa del Sol. The villa is owned by Peter Neeteson, a good friend of my father. Many thanks to Peter for inviting us, we couldn’t have wished for a better week! The 12 of us, including one non-cyclist and one three-year old, settled in quite comfortably in the luxurious villa which has capacity for up to 20 people, plenty of social space, excellent wifi and some even braved a post-ride plunge in the pool that was nicely warming up during the course of the week. For a full impression of the villa, see this link. 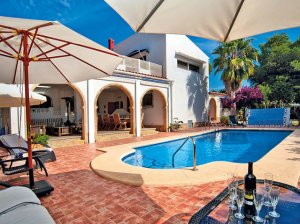 The weather gods were on our side. Apart from some rain on the morning of our departure day, we enjoyed riding in summer kit, lunch stops on sunny terraces and temperatures up to about 25 degrees. Oh yes… life is beautiful when all there is to life is getting up, riding your bike amidst amazing scenery and friendly faces, chilling out at a luxury villa, eating as much as you like and falling asleep knowing you will be doing it all again the next day. For more details of Paceline’s week in Xabia see the write-up by Gareth Thomas on our team blog. Hopefully Peter’s website will be available in English soon (Peter, let us know if you want some help with that). He is happy for any other cycling clubs and teams to contact him on neeteson@neetesonvakantiehuizen.nl.

As expected the backlash of taking two cycling breaks in March was a pretty hectic working week in between, including a good but tiring work trip up to Middlesbrough and virtually no cycling all week.

I can’t feel all too sorry for myself however, as I jetted off to Mallorca again the Sunday after, for a stay at Pollensa Park and Spa Hotel courtesy of winning a week at Stuart Hall Cycling Training Camp based on my results in the South East Women’s Time Trial Series (SEWTTS) last year. Fellow SEWTTS riders, Elin and Sarah (with Sarah having won the ‘best novice’ prize) joined me on the camp… well that is once they arrived a day later… having just missed their flight on the Sunday due to a coffee and cake deal…;-)

This was my fifth time cycling in Mallorca. Although it is so much more crowded with cyclists than the Costa Blanca, I just love the variety of route and profile options. I mixed up the group and solo riding a bit this time, both by choice (specific training) and because of force majeur (an unfortunate crash into a wall left me with a bruised face and hand for a few days, thus not trusting myself to have adequate control over my brakes in a group). My three favourite rides were:

The first day (90-odd miles in a good fast group, including the Soller climb and the Puig Major, a lovely fast descend and some strong chaingang work on the way back);

The fourth day (96-mile solo meander through some lovely lanes to Llucmajor, up the Randa/Cura climb which always offers amazing views, and up Formentor to finish); and

The last day (312-km solo lap of the whole island, of which the first few early lonely hours through the mountains and along the Deia-Andratx coast are simply my most favourite riding ever!).

The hotel was great (just renovated/upgraded), with a very comfortable bed and lots of tasty food. The bike storage facilities felt safe and had a convenient cleaning station. The ride leaders were all friendly and knowledgeable. And with a bike shop/café, bar, mini-market, the famous Tollos restaurant and the beach all within walking distance… what more could you wish for? Amazingly, Stuart Hall also includes transport to and from the airport into the price. Thanks so much Stuart, I had a great week!

I feel a lot more fit now than I did upon my return from Tanzania in mid-January. Hopefully some of the training will pay off soon, but I strongly doubt my legs will be up to much during my first 10 mile event of the 2015 season on Good Friday after all those endurance miles.

As ever the main goal this year remains to continue enjoying riding my bike and hopefully I can build on last year’s success.