Super what? I know I am probably talking to a niche group of people, but I am happy and proud to say that after completing a series of 200, 300, 400 and 600 km Audax rides this year, I now qualify as ‘super randonneur’. It’s been fun and a slippery slope, as I am already eyeing 1,000+km Audax rides now…

Incorporating Audax rides into my training this year has been really enjoyable. Time will tell, but I believe these long self-supported rides have strengthened me on so many levels and put me in a strong position for my long distance time trialling challenges, which are now just around the corner.

…My soul has been fed with amazing scenery and a real sense of adventure. My legs have been challenged with numerous hills and my mental strength has been tested to new limits …

For the 400k Audax I opted for the Severn Across on the 30th of April. It is a beautiful 407km route starting from Chalfont St Peter (Buckinghamshire), through the Forest of Dean to the River Severn at Chepstow and back via Membury and the Chilterns. The start wasn’t too far from my house, so I decided to ride there and back too, resulting in a total distance of 466km.

Cycling over, I bumped into fellow Kingston Wheelers Omar and Sarah and upon arriving at the HQ it was nice to see more Wheelers. It was a pretty cold start with frost on the grass, but the sun soon came through and the wind wasn’t too strong. I am keen on testing my own limits on these rides, but still found myself on the wheel of Chris Herbert for a lot of the ride. Looking at my power profile later, I had ridden the first 8 hours at or above my 12-hour power, so can’t say it was a complete free-wheel either, but nice to get some shelter and company. Passing through the lumpy Chilterns I told him to push ahead as I was constantly falling behind on the climbs, but somehow I emerged on the other end not too far behind him, so we rode the rest of the route together again.

Cycling over the Severn Bridge has become quite familiar by now (as it is also part of the Dean 300km and Bryan Chapman Memorial 600km). It remains a stunning sight. People have warned me that riding over the Forth Road Bridge on the Lands End John o’ Groats route can be a bit scary. The Severn Bridge has been fine. Fingers crossed the Forth Road Bridge – and the conditions when crossing – is no problem either.

My biggest fear of the day was Symonds Yat which has a 20% section. I recalled the climb from a kayaking trip a few years ago when just walking up was a challenge. I shouldn’t have feared. Nothing an 11-28 cassette can’t handle. In fact, the biggest challenge was not to get stuck behind stopped cars on the way up waiting to let cars pass coming down on the narrow road. The view from the top at Yat Rock is amazing, but unfortunately I didn’t take the time out to enjoy it on this occasion.

Aside from some cramp issues in my hamstring (around the 10-hour mark?) everything went quite well. The cramps probably were a result of having ‘burned a few too many matches’ trying to ride up hills at Chris’ pace early on. By now, I feel more comfortable with cramp. I start to recognise the twitches announcing the cramp spat coming. It still hurts a lot, but I can manage to ‘relax’ it somehow and keep riding at least. Not long ago it would bring me to an immediate stand still/crash. Half a bag of crisps also helped with topping up the salts.

Other riders had spoken about an option to return along the A4, but as Chris and I were a bit faster, we would have hit the busy dual carriage way before 7pm on a sunny Saturday.., so we decided to stick to the narrow and lumpy back lanes instead. For a change all my electronics were working well. The Garmin – external battery – USB cable combination finally matched and the bright and powerful Exposure Strada light made the dark lanes quite good fun. The only real mishap on the ride occurred two streets from home, when a piece of glass I had managed to pick up when riding back through Southall had worked its way through and the rear tyre went completely. It was close to 10pm by then and I was lazy, so I phoned Chris and found myself at home and in a warm bath not long after.

Some rides truly deserve to be described as EPIC. The Bryan Chapman Memorial 600km Audax is definitely one of those. It is simply the most amazing route I have ever covered in the UK and we were blessed with great sunny day time conditions to make it even more enjoyable. 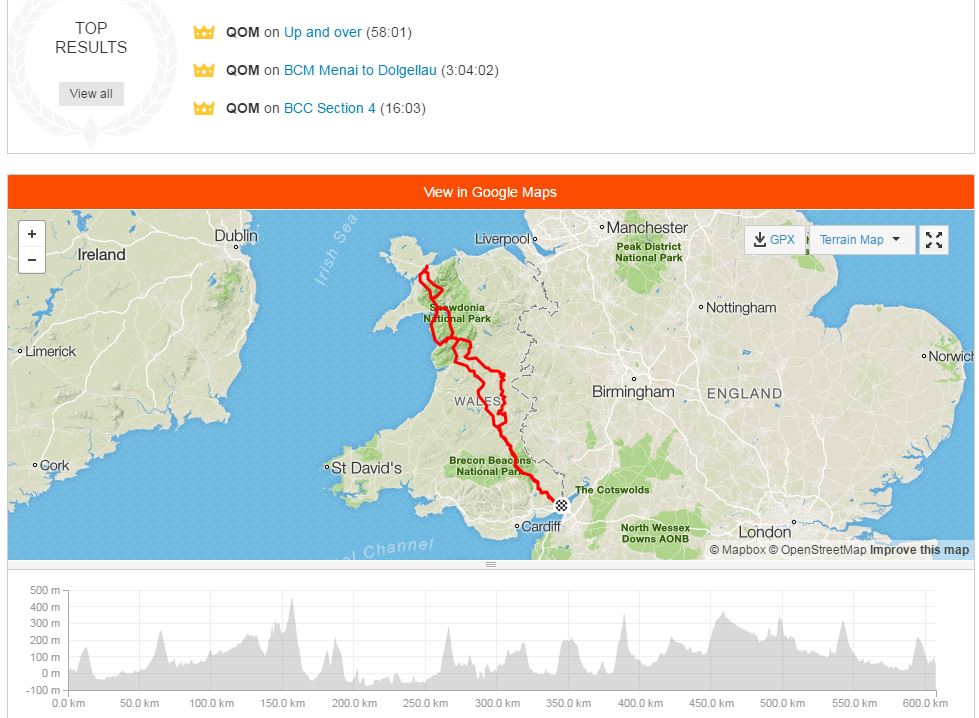 The official route should have been about 595km but brain freeze resulted in me adding a few extra miles (ridiculously steep sheep trails in fact), adding up to a total distance of 608km including nearly 8,000 meters of climbing. Add to that the fact that I mostly rode solo and didn’t stop to sleep, I think I can say this definitely was my most beautiful but also most difficult ride ever.

This video highlights very well how beautiful it all was and also demonstrates how taxing riding through those night-time conditions was. The video takes about 12 minutes, but it really is worth watching it all (great work Adam Watkins!). I rode with these guys for 30-minutes to 1-hour or so on the way into the second check point (Llanidloes) as we were all hovered up by a tandem. Now that is a challenge I definitely would be up for in future!

I was one of the riders caught by surprise by the rather large queue at the HQ and finally was off by 6:15 am. I quite enjoyed starting off from the back saying hello to various Kingston Wheelers along the way, but was never quite sure where the very front was. Eventually it dawned on me that I was the very front, duh!

The first 400 km went really well averaging just under 17 miles per hour despite riding mostly solo. The climbs were not as bad as I expected. I was really pleased to see that I could make my way up and over the Machynlleth mountain road (which is stunning!) without having to walk like I did in 2011 when I had only just started cycling and the hills on the Lon Las Cymru 4-day trip were all a bit too much for me (despite riding on a triple back then). I did make a brief stop at the top of one of the climbs though as the view was just too good.

I had felt really comfortable on the bike until the 400km point and made it back to Kings Youth Hostel (near Dolgellau) for the 2nd time around 9:30pm as the first rider. Cycling back from the Menai Bridge at the end of the afternoon had been really enjoyable. The wind was in my back and greeting all the other riders going the opposite way around sunset really lifted my spirits. If you could bottle up happiness those few hours would definitely be part of the recipe. My legs were feeling fine, my head was in a good place, and my new ALE skinsuit was just the most comfortable outfit ever. It was a bit of a gamble to wear it for such a long duration on its first outing, but clearly it is a great piece of clothing! I also loved getting reactions like “well, you definitely can’t miss you”. Whether or not that was meant as positively as I took it is a different matter (tastes differ after all), but being visible (and comfortable) was my main intention as I am planning to wear this (and/or the long-sleeved version) for my planned solo LEJOG record attempt next year.

Arriving at Kings with nobody else there but the organisers and helpers was a luxury, but also a little lonely. After a nice warm shower I changed into my night outfit and enjoyed some hot food. But how ill-prepared I was! As I set off from Kings the temperature was still quite pleasant, but once passing the next control post (Aberhafesp) I was already chilled to the bone and it soon became apparent that my outfit was not suitable for the -1 (or even -3) degree temperatures that night…

Two of the other faster riders I had been playing cat and mouse with all day (Paul and Adrian) pulled out of Aberhafesp and kindly offered me their down jacket, but I stubbornly refused and battled on. My hands were so frozen (Sportful Fiandre gloves are great but not up for this job) that I occasionally had to stop and push the gear levers with my whole body weight if I wanted to shift gear. Braking became a lottery and my legs were so frozen that even 100W felt like a lot of effort. The one thing I was blessed with, I guess, was that it was so bloody cold that ‘the dozies’ or the urge to fall asleep on the bike never occurred. It became a long painful 8 hours and even when the sun had risen again I was still so cold that my heart rate never reached more than 64% of max again. Worst of all my brain had frozen and I started making some very poor navigational decision leading me close to despair of never being able to get off that sheep filled hill above the mist again!

Eventually I rolled back into HQ at 10am. I had aimed for 8am, but given the conditions and challenges, I am happy and proud of that achievement. I think I have expressed this in previous blog posts, but it is overcoming the challenges that I thrive on. And there certainly were plenty in this ride…. but the overwhelming feeling and memories are of pure happiness and a real sense of adventure. Bring on the next challenge…. faster, further, more difficult… I am up for it!

A few reflections to add: