In 2013 I did my first 24-hour cycle race at Le Mans on the famous Bugatti Circuit. Solo. Straight into the deep end and I absolutely loved it. This year I competed at Revolve24, a similar 24-hour race at Brands Hatch in Kent. This time as a mixed team of 4 and again I got a real buzz out of it. Both are fun, but here are some of the key differences I found between racing solo or as a team.

Harder solo or as a team?

Without doubt a solo race for 24 hours is harder than racing as a team. Wow, the luxury of having time to sit down and eat (I brought some pasta but there was plenty of much nicer food for sale); having down-time to relax, leisurely change into fresh or warmer kit for the night, chat with friends in other pit garages and even catch some sleep. It is also easier and much faster to bounce back from a team 24-hour effort. After LeMans24 my hands were numb for weeks and I couldn’t sit properly for ages either… It is definitely harder solo, but I am not saying it is easy as team either!

In many ways racing as a team can also be harder. Harder for the very simple reason that if you want to do well as a team, you all have to be able to maintain a much higher average speed and therefore adapt your strategy.

At LeMans 24 Hr Velo I could just go into ‘diesel’ mode and ride steadily at my own pace. I say that, but reading back over my notes from 3 years ago I know that I failed that strategy and easily got tempted into jumping on the back of fast relay riders, pushing myself too hard up the hill and forcing myself into the red way too early and way too often.

This year as a team of 4 the challenge was to re-activate my body and mind when it came to my turn again. Riding solo I found it easy to ‘stay in the zone’. But waking up after a nice hot meal and even a little sleep I found it harder to motivate myself to get out on the course.

The biggest challenge for a team of riders is probably working out how long each rider’s stints should be. Our strategy was to keep the team’s overall average speed as high as possible, because that is the only way you can win your category or do well in the overall ranking.

We had tried to work out a schedule in advance with shorter turns during the day and longer ones at night. We probably stuck to that format, but the duration of individual turns varied a bit more. As I was riding with three strong guys this meant that my turns were a bit shorter than theirs. On hind-sight I still wonder if I couldn’t have done a bit more, but at the time I was afraid that my average lap times would start to drop off too much if I stayed on the course for more than 5 or 6 laps per stint.

At first I felt a bit bad for cutting it short, but as we started to rise up the overall rankings it was obvious that our strategy of having our strongest riders do the longest turns (whilst balancing that with also making sure they had enough recovery time in between) was paying off. ‘Strong’ is relative of course. I know that I may stand a much better chance at being equally fast as most of my Revolve24 team mates in a solo 24-hour.

In the end, we finished: 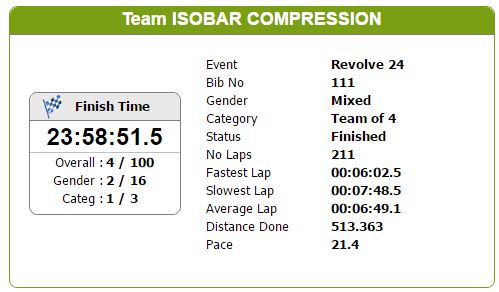 If you click on the image you can see how our team strategy worked out, how many turns each rider did, what their individual lap times were and how our position changed over the course of the event.

For those of you who know my team mates, you will spot how ironic it was that, surrounded by 3 long-distance diesels, actually the one training for 10-mile time trials did the most laps in the end. We just couldn’t get him off the course! I think we may have a 24-hour convert…

At the same time, one of the other guys (a former World 24-hr time trial champion) went into absolute beast mode for the last hour, riding like he only just started a short 25-mile TT, smashing out some of his fastest lap times and extending the narrow lead we had built up to our closest rival (the Giro 4 team) by a full lap. It must have been those magic Isobar Compression socks we used!

When I raced LeMans24 in 2013 I was hesitant when one of the guys from my cycling club who was competing as part of a duo offered me to sit on his wheel for a few laps when I was really suffering at some point in the race. I soon realised that everyone was doing it and this strategy was again confirmed to work at Revolve24. The winning team had entered two teams of 4, so they could always work together and draft each other. Depending on how evenly you are matched, this strategy can even work for solos. So if you fancy a solo challenge but are not sure if you are strong enough (yet) or feel really strong and are dead keen on winning, it might actually make sense to enter with a few strong cycling friends in the solo category…

This strategy is probably easier to execute at LeMans24 (which is a little less hilly and where there are thousands rather than hundreds of competitors). There I nearly always found an evenly matched rider to work with for a while. At Brands Hatch I didn’t have such luck and it was a bit more like a solo time trial (which I don’t mind at all, I am a time trial specialist after all).

More fun solo or as a team?

Ohhh, now that is a difficult one.

For those that like to suffer and explore/expand their own boundaries, there is nothing like a solo 24-hour race. No doubt things will start to hurt at some point. But the kick you get out of overcoming those challenges and the sense of achievement will soon make you forget about all of that. Or as one my team mates advises… “when all else fails, make something else hurt more”…

Most people will probably enjoy it more as part of a team. It gives you downtime and social time. It challenges you, yet gives you enough time to recover. But most importantly seeing your team mates do really well can give a huge boost. I really enjoyed racing as a part of a team. In my case it also meant I could give things like ‘fastest lap’ and ‘queen of the mountain’ a go, rather than sticking to a steady pace. I felt a little bit awkward walking away with all those fantastic prizes for those challenges, whilst my team mates and our support crew had absolutely worked their socks off! But at least I know the bubbles went down well.

So will I race solo or as a team next time?

My first race after Revolve24 will be the World 24 Hour Time Trial Championships in California in November. This is a solo challenge. In a perverse way I am looking forward to it, but I know there will be moments when I wish I was back at Revolve24 racing as a team and enjoying my chill time!

I like to mix things up though, so another team 24hr could be fun. I really enjoyed Revolve24. I might see if I can get a strong team of women together for next year, although it might clash with my Land’s End John o’Groats record attempt…